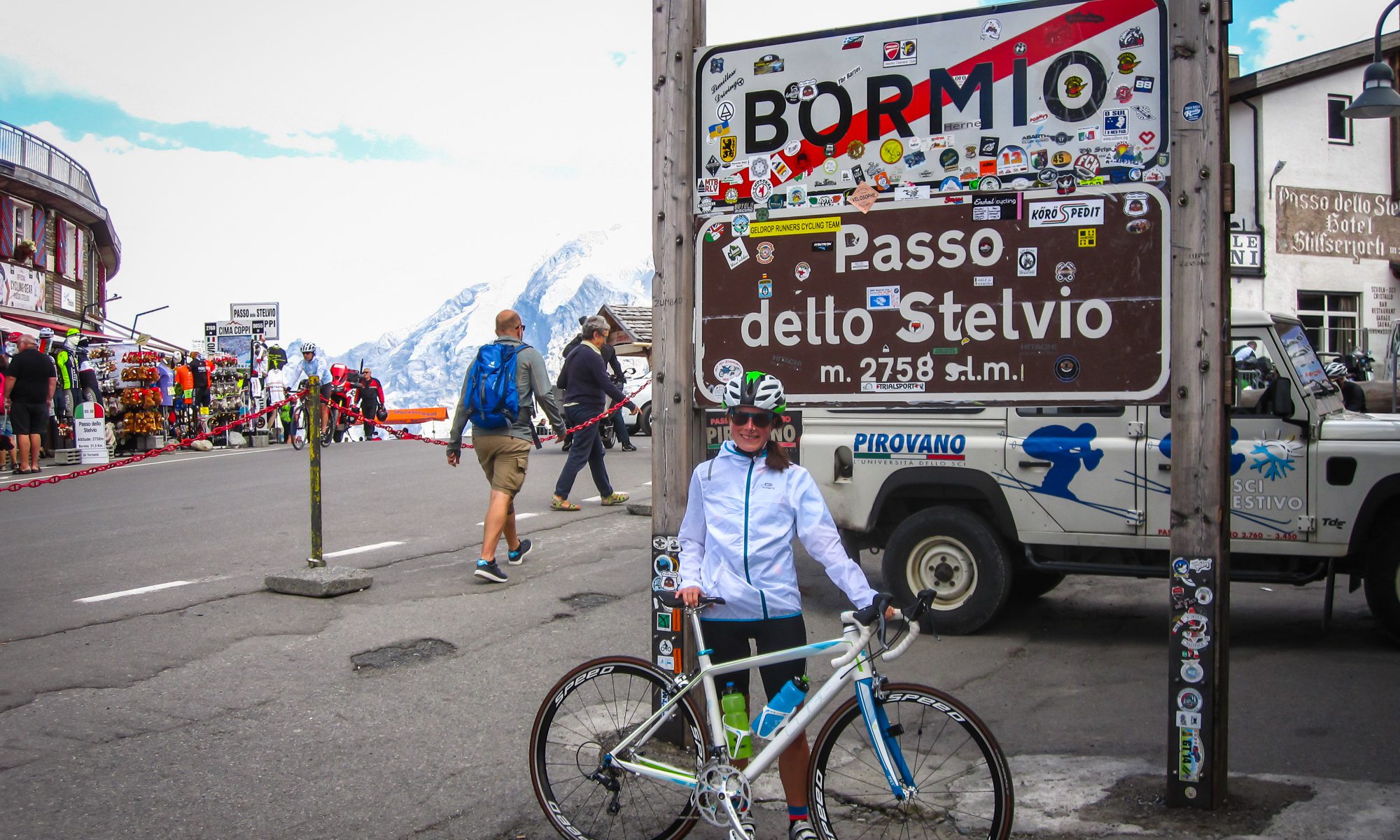 To motivate those of you who have just started road biking or who are still thinking about whether they should start, I’d like to tell you about one of my highlights today: the Passo dello Stelvio.

Last year, my boyfriend and I rented a camper van to travel through Germany, Austria and Italy. We hadn’t mapped out a detailed route, but we already knew we definitely wanted to climb the Stelvio Pass by bike before we set out. Until I went on this holiday, my only mountain experience was a hiking holiday in Bavaria when I was about 10 years old. I had only ridden my road bike and my mountain bike on undulating routes in the Oberberg region and Eifel, low mountain ranges close to where I live. When doing that, I’d realized that I enjoy climbing most, but I can’t say that I knew what many relentless kilometres of climbing – without any flat or downhill sections where you can recover – felt like.

The day before we tackled the Passo dello Stelvio, we went on a ride in Austria which took us to the Silvretta-Hochalpenstraße – the ascent between Galtür and Bielerhöhe is about 11 km long, with an elevation gain of about 450 m. It went surprisingly well, and I was relieved that we hadn’t completely overestimated our abilities. At least there actually seemed to be a chance that we could also conquer one of the most iconic passes. On top of that, the weather was perfect, and at 2,032 m above sea level, we could enjoy the view of the surrounding mountains.

In the early afternoon of the following day, we started in Trafoi to climb the Passo dello Stelvio on the eastern route. About 14 km with an elevation gain of 1,200 m lay ahead of us. Down in the valley, it was more than 20°C, and I was glad that the first of the famous switchbacks are below the tree line, so that we could ride the first kilometres in the shade. The beginning was still quite hard for me, though. Having been pretty optimistic beforehand, I now had the suspicion that this ride was really going to hurt. After a short break, we decided to go a little more slowly, and it turned out that even 1 km/h makes a huge difference on such a long climb. Cycling suddenly seemed rather easy, and as soon as we had passed the tree line and could see the finish, the pain turned into pleasure. As I mentioned before, I was in the mountains for the first time in my life, and the view of the snow-capped peaks really impressed me. Reading the names of all the pro riders who conquered the pass as part of the Giro d’Italia on or next to the road also felt great. 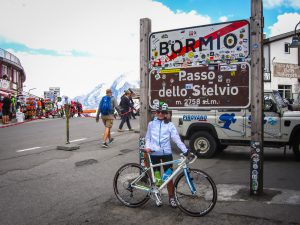 When we reached the top, we of course took the obligatory photo in front of the sign to capture the accomplishment. We didn’t stay there too long, though, as it was a lot colder at 2,758 m than it was down in the valley and we weren’t really prepared for that. We also still had to find a campsite for the night (the one in Trafoi, where we had intended to stay, wasn’t open). Because of the cold, the descent was much more unpleasant than the ascent. I could barely feel my fingers – not ideal when you’re going down switchbacks and need to use your brakes all the time. Next time I’ll definitely remember to bring warm gloves, and I’d recommend that to everyone else as well.

If you’re a rider who doesn’t have much experience yet but still want to tackle a pass, the Passo dello Stelvio is not a bad one to begin with. Although it’s a continuous uphill, it’s steady and not particularly steep (the average gradient is only about 8 %), so that you can quickly find your own rhythm. Having been able to conquer one of the best-known passes in the Alps after only a year of road biking motivated me a lot. If I can already climb the Stelvio Pass without any major problems (though not as part of a long ride), what else can I achieve with more training? I’d definitely encourage everyone who is thinking about cycling in the mountains for the first time to give it a shot. As long as you have basic fitness, don’t plan to ride 150 km a day, don’t overexert yourself right at the beginning and of course have an appropriate gear set-up, there’s no need to worry.