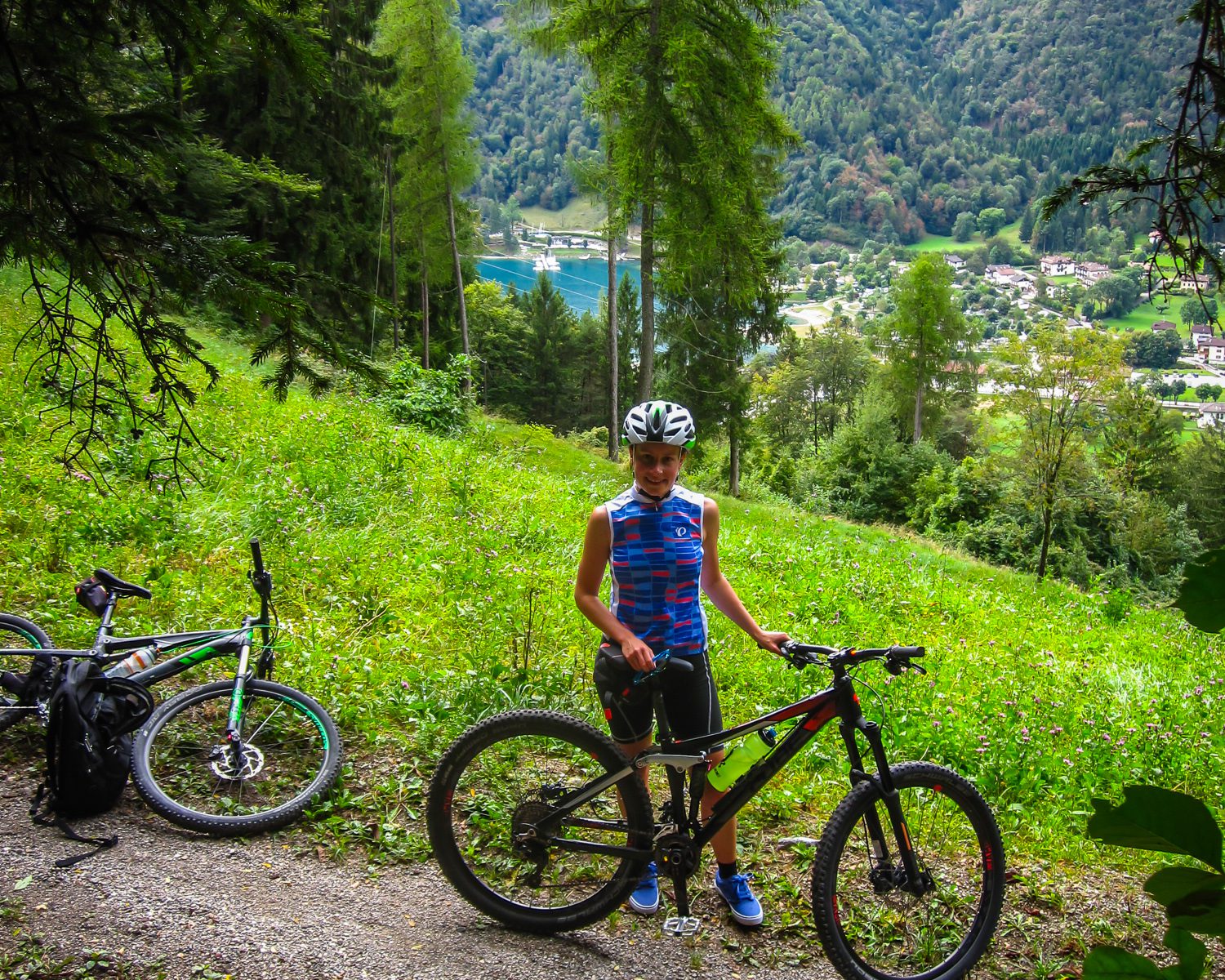 My biggest mountain biking highlight was following the Ponale Road from Torbole on the shore of Lake Garda to Lake Ledro – a real classic, as I know now.

During the same holiday that my boyfriend and I climbed the Passo dello Stelvio on our road bikes, we rented mountain bikes in Torbole on Lake Garda a couple of days later. Due to lack of space, we had had to decide whether we would take our road bikes or our mountain bikes with us and had opted for the road bikes because we thought we would be riding them more during the two-week holiday. In Torbole, we came across the Carpentari Bike Shop, where we rented really good mountain bikes at a reasonable price. There are many other bike rentals in and around Torbole as well, though.

At the shop, we were given the tip to take the Ponale Road, an old military road, from Riva del Garda to Lago di Ledro – a great tip! Fortunately, we set off quite early in the morning, so the road wasn’t too busy despite the perfect weather. As we saw on our way back, the Ponale Road isn’t only extremely popular with mountain bikers, but also with hikers. The dirt and in places asphalt road is almost a constant uphill right up to Lago di Ledro. The gradient is rather gentle, though, so mountain bikers who aren’t in the best shapes of their lives will enjoy the ride, too, and as long as you aren’t going through one of the tunnels, you can even take in the beautiful views of Lago di Garda and the surroundings while cycling.

When we arrived at Lago di Ledro, there was still a lot of time left until we had to return the mountain bikes, so we decided to ride around the lake. We didn’t want to just stay on the road, however, and therefore followed signs which pointed out the “Side Tour” – if I remember correctly. I can’t find anything about it on the Internet, and we didn’t have a Garmin or anything, so I can’t retrace the route now. But the signs definitely said something which made us believe they would lead us around the lake on nice tracks. It turned out they did. Quite in contrast to the Ponale Road, the track was very steep, though, and didn’t seem to end. I even had to get off my bike once and walk a couple of metres because I thought I’d fall over if I didn’t. This was the first and only time since I started cycling that an ascent forced me to dismount. 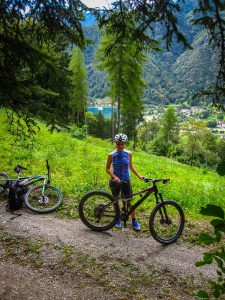 In spite of or maybe because of that, I really enjoyed this ride around Lago di Ledro. If a ride isn’t challenging, it doesn’t feel as if you’ve accomplished anything. On top of that, we could soak in the views of the picturesque lake from above. Another plus was that we didn’t encounter anyone else on this ride around the lake. Eventually, the track went downhill again. It was pretty steep and the surface wasn’t only gravel, but also concrete, which was wet and therefore slippery in some places. I was very glad when we finally arrived down at the lake safe and sound. We then took the Ponale Road again. I’m not the most confident mountain biker when it comes to going downhill, but this road isn’t particularly difficult to ride and, as I mentioned before, not very steep, either, so that even I could stay off the brakes most of the time (as we went back in the afternoon, you often had to give way to hikers or other mountain bikers, though).

Because we had lost our way on the way back, the ride took us more than seven hours in total. I can’t say how many kilometres exactly we covered and what the elevation gain was, but I know it felt like a lot. I should probably also mention that we only had a few muesli bars and water, so at some point the only thing that was on my mind was the pizza we were going to have in Torbole after the ride. We had definitely earned that pizza – and tiramisu for dessert 🙂